I am writing a book. It is set in Birmingham and Wales and begins when Olly gets a wrong delivery. A very wrong delivery. It is the most unlikely ( and potentially deadly) thing to fall into the hands of an eleven year old boy, and he can't wait to use it...

Here is a piece about the eternal Age Banding Books debate. I wrote it when I was supposed to be writing something else, which is always a good way to get some kind of writing done.

Warning,  for any child readers, below there is a photograph of my diary when I was twelve, with a *rude* word on it, or 'Square' word, as my son calls them.

Everyone seems to have a strong opinion on age banding books.

What do you think?

Why should we age-band children’s books?

A ten year old reader I know recently got hold of a series of ‘Teen’ books. I know these books well. They have dark themes, bad language, sometimes tasteless humour, frightening scenes with violence and more than a helping of anarchy. It seems that teens have enjoyed them and they are stocked in many school libraries. The reader’s parent suggested she waited until she was fourteen, or at least twelve, until she read them.

The girl found the books in the school library and read them all, with her parent’s sigh of defeat. It was only a suggestion, after all.

Hurrah for the girl! I hear. She got hold of those books! She did not allow herself to be censored. Freedom! Reading! Adventure! Growing Up!

But I did not think they were really suitable for her. Not quite yet. In a few years she would love them. At the moment her favourite thing is Malory Towers. Her reading age is far above this, but emotionally, this is what she’s comfortable with. I know this, because she is my daughter, and I wrote the damn books in question. 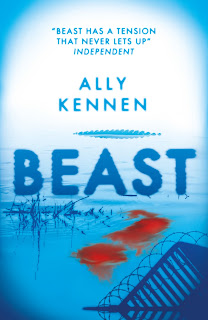 I originally wrote the first one, Beast, for adults, and I wrote the other two for teenagers. Definitely teenagers. Preferably older ones. Not children.

Children mature so massively in such a short space of time. Everyone remembers a relative who says ‘WOW haven’t you GROWN!’ Which is always so annoying because of its banality but it is dramatic  because children seem to morph every six months or so, with an updated body, different interests, vocabulary, sets of feelings, friends and of course, rapidly expanding thoughts and ideas.

In the years from nine to fourteen, these children grow at wildly different rates, from footballing kitten-lovers into mini adults, capable of out-debating a politician. And there’s no doubt that books can help with the transition.

But  at the same time the popular view seems to be that exposing these growing children, via the ‘safe’ pages of a book to sex, violence, divorce, misery, war, bloodshed, terminal illness, death, should be unfettered. Let them explore our gruesome world on paper first. A bit of light literary incest at tea time, followed by a nice dose of kidnapping, children murdering each other and self harm at bedtime. Our bright little nine year old is more than capable of reading the words, and of course, quickly assimilates the content amongst her spelling tests, gerbil feeding and friendship wrangles.

But authors! Have you comforted a terrified child in the dead of night, her imagination fed by your fictional nightmares? Have you seen the steady drip of ‘adult’ themes that are drowning our children in darkness? From the plastic glitter of girl tween-dom, with the celebrity, weight/shopping/lipstick girl magazines mixed in with good dose of fictional grief and torment?  Why is it OK to age band films, but not books, are they less powerful?

Children get spooked! I know an eight year old boy who will not read, or be read, ANYTHING where anyone gets hurt or frightened. It doesn’t take much to give a child a nightmare. The wonderful Judy Blume says that a child will put a book down that is not right for her. No she won’t! I picked up Amityville Horror as a twelve year old and was SO frightened by it, I had to finish it, or it would work its bad magic on me. After reading, I could not have it in the house and went out and BURIED it in the woods by our house. I put a rock on it. I avoided that glade in the future. It filled my head with darkness and horror for a very long time. My young life was tainted by its poison. Books are powerful. A ten year old’s world can crumble because of a broken pencil case. Because of a single mean word at the wrong time, So is it really appropriate, or kind, to expose them to the darkest horrors of adult life?

It is like throwing a wrecking ball into a fragile lace of developing neural networks
Of course, we cannot protect our children from the sadder parts of life. It is part of growing up to recognise and process them. I’m not suggesting that we imprison our children’s minds forever in a (sinister) world of immortal bunnies and everyone being jolly nice, imposing intellectual malnutrition in the name of preserving innocence. Of COURSE good, well written, gritty, stories are crucial  to understanding our world, developing our empathy etc etc, and reading Jilly Cooper as a young teenager was extremely funny and diverting, and I knew it was an adult book anyway. But maybe there is a case for letting us parents know, on the cover of ‘children’s’ books, some of the content within. A recommended age would be helpful. Not so that your mature, book addicted ten year old CANNOT read a book for 12 +, and is miserably marooned on her age band until the year turns, no way! but so that she, and her parents can make an informed decision. Yes, the children might make a beeline for the ‘older’ tomes, but at least they are forewarned.

Parents belt into book shops, or glide online, searching, searching for something fabulous and suitable that their little 'un will LOVE. They probably haven’t read all the latest reviews. They don't know about the prizes. They don't idle away on Twitter. The cover is all they have to go on.

Authors are (mostly) not child experts. They produce stories, not therapy, from their lurid and wild imaginations. Keep them coming! Keep them crazy and bitter and beautiful. But give us parents, and teachers some help here. Parents are not The Man, seeking to censor and hold back our children’s imaginations and growth, like we are all versions of the Dursley Family in Harry Potter. We’re not all over protective nit wits, seeking to stifle our little ones and keep them in the cradle. But we know more about our children than authors do. We want them to thrive and come alive, to set their minds racing. deliciously, dangerously thrilled and dance within the pages of mayhem and mystery.
But we don’t want them terrified, or traumatised.  We don’t want them whimpering, nightly, under the duvet, fearful of what horrors lurk out in the dark, and worse, in the ‘real’ world, endlessly ruminating on their parents potential death or obsessing over the kidnapping of a sibling, or the stalking by vile unknowns on the internet.

Authors! Don’t throw them helpless on the madder reaches of your imaginations too early.

Why do we want children to grow up even faster than they do, extremely well, by themselves? Why inflict adult miseries on a child. Leave them alone! Let them laugh! Let them hunt out their own stepping stones. Let their exposure be measured, so they don’t get overwhelmed by all the darkness of our world all at once.
Life will get tough for them soon enough.

There is a perceived danger that readers will feel stigmatised by reading a book with a younger age band. Their peers will drag them out of the library laughing horribly, and dandle the offending text above them like an implement of torture.
Well, yes, sometimes of course this happens. But quite a lot of children are really rather kind and wouldn’t mention it, or even notice. But yes, it might put some children off a few books.
But I bet more books will get sold,  and therefore read, because parents will have some idea what they are buying.

My ‘younger’ books are officially for ages 8-12. But if I was Supreme Queen of  Everything, I would say, on the cover, they were for ages 8-100. This would be a more gentle, inclusive approach to age banding. The content is suitable for younger readers, but older ones might like them too.

A recent Scholastic survey suggested what a lot of children really want in books is humour.

Which is deliciously childish.

.
I’ll say it again, just to be clear. DON’T CENSOR, JUST GIVE A US A CLUE ABOUT THE CONTENT!

I include a picture of the front pages of my 12 year old diary. I howled with mirth when I found it, such a tender young mind. But for all the lewd bravado, it remains very, very childish. What book would you recommend for that little girl? She talks the talk, but (shhhh) she still plays with her Sindy Dolls! She makes crowns for them!

By the way, my daughter gave me some VERY funny looks when she was reading my YA books. She told my son ‘Mummy has a side to her you never knew existed.’  Which I thought was funny. Then she said there was too much bad language (many other young readers have made this comment over the years)
Then she said ‘She’s got an EVIL mind.’

Which I hope isn’t true. And if it is, I’d rather not inflict it on the ten year olds.

Ally Kennen. Author of eleven books for children and teenagers and mother of four children. Her first book, Beast, was shortlisted for the Carnegie Medal, the Booktrust Teenage Prize and won The Manchester Children’s Book Award. 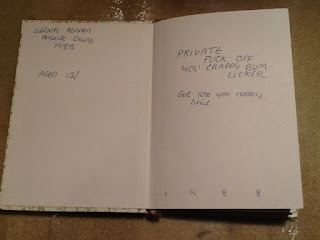