Bullet Boys is mentioned on The Guardian's BOOKS BLOG.

COMING SOON
I recorded a podcast for The Guardian a few weeks ago which I believe will be featured within the teen pages in a week or so. I've also written a blog entry about BULLET BOYS and lots more stuff is planned for the next few weeks.

MORE STUFF
I'll be attending the Leeds Book Awards on May the 24th. (Quarry has been shortlisted)

AND MORE
I snuck into THAT dinner last Thursday (The Book People Gala Dinner) as a guest of my buddy, author Elen Caldecott  http://www.elencaldecott.com/  and it was most exciting. I saw lots of Authors, wore high heels for the first time in my life (sad I know) and donated a pristine copy of Fungus The Bogeyman (is that an oxymoron?) by Raymond Briggs.

I SAW Jacqueline Wilson. I did! AND KORKY PAUL (faints) I leered at Patrick Ness from behind a pillar, informed Jamie Oliver his wife should write a book about toddlers (failing to mention the glorious food). I wittered  about worms to Axel Scheffler, challenged Catherine Bruton to a height contest and addressed Andy Stanton as 'Mr Poo Bus' (I'd never met him before)

All this would pass for wit in my corner of Somerset.....but at least I didn't fall down the stairs in my high heels (cramp)

OH, and I heard Mr Morpurgo sing 'John Barleycorn,' which was lovely, like being in the pub on folk night, and then Anthony 'Alex Rider' Horowitz  made a scary speech (remind me never to offer him a choice of mugs) which caused gurning and then smiles of relief.

Here is a pic of me and Elen on the red carpet. (Elen is the beauty in red, I am the one who is about to fall over) 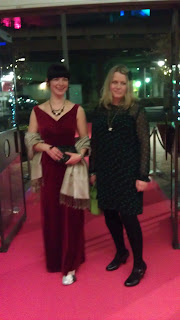 Bullet Boys is well and truly launched. I went North with the lovely Catherine from Scholastic and we visited Preston and Salford.
Look at this cake, made by All Hallows Catholic School, how fantastic! and it tasted great too. I've never had a book cake before and I am much in favour. 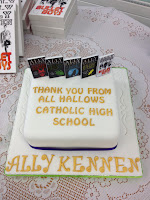 Over the course of the tour I held raffles with fabulous prizes (ahem) had lovely dinners and held creative writing workshops and Author Talks at lots of great schools. It was great to meet all of you. Even the student I had to convince that a fiver was a fair price for a book.( remember, coffee and a cake in a cafe don't give much change from five pounds these days. I hope you've read the free book you conned out of me!)                                             I hope I didn't give the 700 odd kids I met my cold, sorry if I did.   I had a most interesting time watching the Indian dancing, and sampling some most splendid canteen grub. We went to Askews in Preston and met Hazel and I saw all the children's books ever published stacked up on shelves and shelves and sheves. it was like the library in GHOSTBUSTERS. Fantastic! Here's a pic of Catherine and Hazel finding MY books. 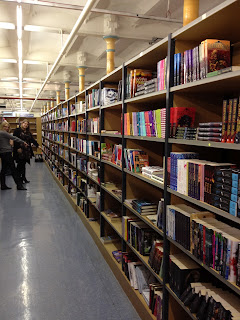 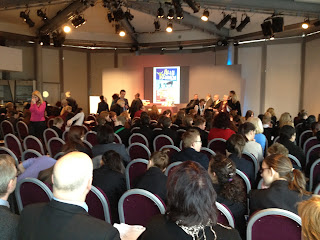 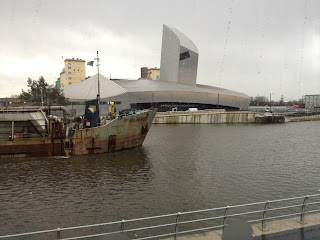 On Friday morning was the Salford Children's Book Award and I met authors Candy Gourlay, Pat Walsh and Alan Gibbons and Jon Mayhew AND Richard Platt AND I met the mayor and lots of kids and Ebony read out a stonking review of SPARKS (thankyou). Michael Morpurgo won with SHADOW. He wasn't there as I believe there is the small matter of a major motion picture galloping around at the moment. Here is a picture of everyone's backs and Catherine haring up the aisle. Wow Salford is proper cool with massive boats and the ship canal and the BBC and Imperial War Museum and the Lowry Centre, I didn't know where to look. We need all these things in Taunton please. 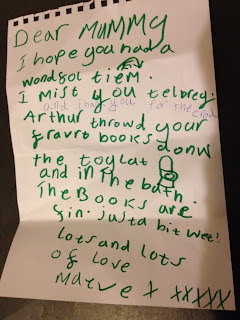 After a quick lunch it was off to another school in Salford, Moorside High (waves) then back on the train to Somerset.
I found the letter above waiting for me; Intelligence of an attempt to sabotage and derail the whole book thing, by a member of my inner circle. Shocking stuff. Come Monday, it was off to Leeds, where I met Hannah, who bravely took over from Catherine as publicist for the tour. here is a picture of Hannah, Donna, librarian at Mount St Mary School, Debbie and another Hannah, trainee! (What a beautiful library I might add) 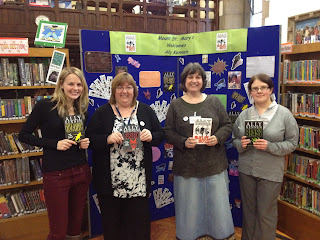 There are lots of new schools being built up North, I visited many sites where a gleaming new building was being raised next to a crumbling old mouldy one. I'd like to see more of that down south too please! 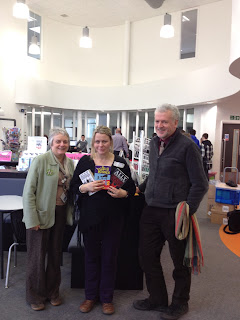 We rushed over to Sheffield where I told Hannah my two lengthy cat stories (sorry) and on Tuesday visited TWO MORE SCHOOLS, The City School and Fir Vale Secondary. Here's me in the BRAND NEW LIBRARY at the City School with Richard from Rhyme and Reason Bookshop (obviously a fan of The Phantom Tolbooth, though I did not ask if he had a son called Milo) and Marion Milroy, Librarian. Thanks for a great visit!
THEN on to Fir Vale, where, despite the fire alarm, I met some great, inspiring kids. Here's their display. 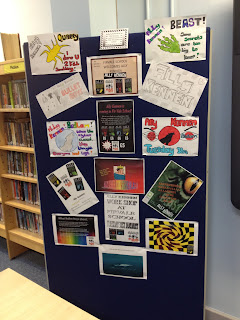 In the centre, there is a picture, by Aliyah, of ME wearing a crown. This is continuing to delight me, thank you.Then I went home, phewy. Thanks Scholastic (And especially Catherine) for organising such a great tour for me and thanks to everyone who had us to visit, we appreciate your hard work and hospitality. BULLET BOYS HAS ARRIVED.....
Posted by Ally at 14:32 No comments: